2020 marks the 100th anniversary of broadcasting in Canada. The Musée des Ondes Emile Berliner and the Société Québécoise de Collectionneurs de Radios Anciens (Quebec Society for Vintage Radio Collectors) have joined forces with other organizations in the Montreal region to celebrate this event.

In Canada, XWA was the first station to produce programs. It was located on William St in Montreal, and began broadcasting experimentally in December 1919. In May 1920, at the annual meeting of the Royal Society of Canada in Ottawa the members had the opportunity to listen to speech and a brief recital transmitted from Montreal. This program was a first and the feat was featured on the front pages all of the newspapers of the time.

This exposition presents the pioneers of broadcasting and the first manufacturers of radio receivers in the Montreal region. 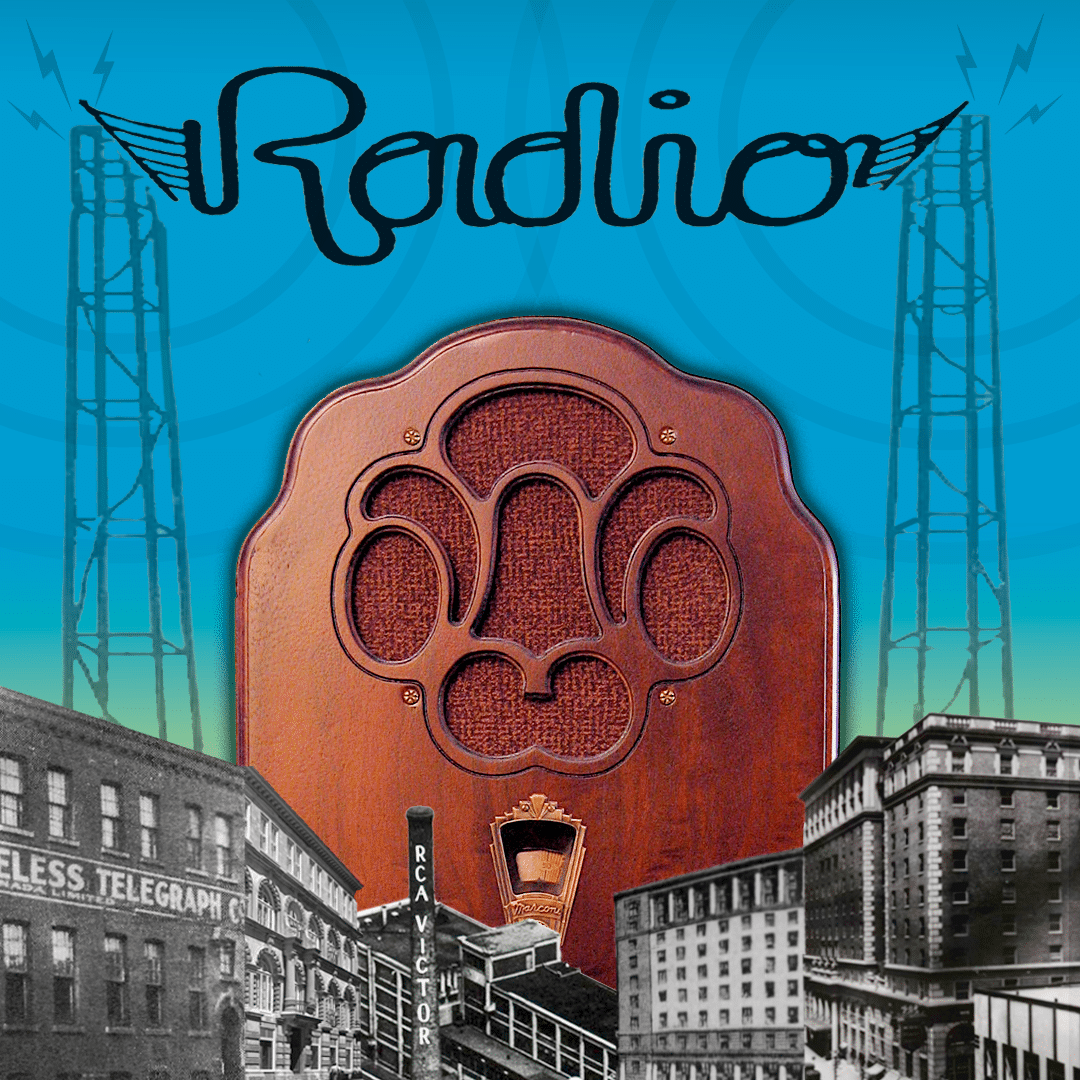 The experimental radio station XWA of the Marconi Wireless Telegraph Company began performing transmission tests in December 1919. For two years, XWA was the only Canadian radio station. However, its few listeners were also able to receive a growing number of American stations.

After the end of the First World War, XWA was once again able to carry out tests. They began using a 500Watt transmitter obtained from the British subsidiary of the Marconi company.

In November 1920, "concerts" were announced via "wireless telephone." It consisted of playing records on a mechanical gramophone which was placed near a microphone.

In 1922, the Canadian government authorized commercial radio broadcasting. By the end of the year, there were approximately sixty stations across the country, including eight in Montreal, and one in Quebec City.

How many of these stations from Quebec do you know?

In 1922, the experimental station XWA became CFCF, a Marconi owned and operated commercial radio station. The new station was installed in a completely new building. The Canada Cement company building located at 600 Cathcart St facing Philips Square. It would become the home of CFCF for the first five years of its existence.

In 1931, the station moved again, this time to the Kings Hall Building located at 1231 St Catherine West. It was also at the beginning of the 1930s that the station became affiliated with the American NBC network. This gave it access to a wide range of programs.

After a fire in 1947, the studios relocated to 4824 Cote-des-Neiges Road. In October 1958, another fire occurred in this building, causing serious smoke and water damage to the studios and equipment. However, programming was still able to continue thanks to the support from other stations like CJAD (founded in 1944) and CKVL (founded in 1946.). After that the station moved yet again, this time to the Dominion Square Building at the corner of Peel and Saint-Catherine.
CJBC – Dupuis Frères

The station belonging to the Dupuis Frères Department Store began transmitting on May 19, 1922 making it the first French language radio station in North America.

A few days after its inauguration, La Presse newspaper reported the following: "The Dupuis Frères Ltée the Grand Department store of the East end, was the first commercial establishment of our metropolis to inaugurate a series of concerts by means of radio."

At the same time, it was announced that the store had a department specifically for selling radios. As was the case in other department stores, such as the T. Eaton Company in Toronto (CJCD), the store wanted to use entertainment to advertise for its goods. At the beginning of the summer of 1922, CJBC transmitted a few hours a week, on Wednesdays and Fridays at 9 pm. However, by the end of 1922 this Montreal station had gone off the air.

To publicize its programs, Dupuis Frères added information about their shows to their regular clothing ads in the major newspapers of the time.

In May 1922, La Presse announced that it would have its own radio station: CKAC. During the weeks following this announcement, the newspaper published step-by-step instructions for its readers about how to pick up the station. The station went on the air officially on September 30.

Movie stars like Mary Pickford and Douglas Fairbanks were invited to the studio. As was the custom then, there was a piano in the studio. At the beginning of 1923, an electric Casavant organ was even installed! Both CKAC and CFCF regularly invited the Dow Brewery orchestra into its studios as well.

In 1929, the CKAC studios moved to Sainte-Catherine St., at the corner of Stanley. CKAC built a much more powerful 18,000Watt transmitter in Saint-Hyacinthe.

It should be noted that another Montreal daily newspaper, “La Patrie,” also had its own radio station. It was called CHLP and was launched on New Year’s Eve 1933. The station would remain on the air until 1957.

Not much is known about radio stations CHYC, CKCS, and CFZC except that they belonged to Northern Electric, Bell Telephone, and Westinghouse. It is possible that these companies may have thought it useful to offer programs to satisfy the buyers of the radio receivers they manufactured.

In 1927, CHYC broadcast for four hours a week and shared the same frequency as CKAC (La Presse), CFCF (Marconi), and CNRM (Canadian National). CHYC was located in the Northern Electric plant on Shearer Street in Pointe-Saint-Charles and remained on the air until 1932.

CHCW, CFUC, and CFJC did not last very long. In 1922, while La Presse was publishing daily programing guides of American Stations as well as CFCF, CJBC, CKAC, there was no mention of these other stations.

In the 1920s, the radio was a curiosity. The receivers were relatively complex. Often professional help was required to set it up and get it working. Large public presentations were organized in movie theaters or in major Montreal hotels.

Railways, and more specifically the Canadian National Railway (CNR), newly created by the Canadian government, also wanted to become a broadcaster. Its subsidiary, the Canadian National Telegraph Company, received a mandate to serve all of Canada. The president of the Company, Sir Henry Thornton, created a division called “Radio”. Its goal was to improve the quality of passenger service and as well as the overall image of the CNR with its employees and the general public. A network of stations was formed.

In July 1923, the first CNR train equipped with radio receivers left Montreal for Western Canada. All along the route, Northern Electric radio stations relayed shows programmed by the CNR.

Aboard these cars, operators tuned in to programs from CNR network stations as well as from American stations. The passengers, seated in comfortable chairs in a specially equipped car, could listen to these broadcasts using headphones.

Of course, people living near the transmitting stations could also receive CNR programs. By 1932 the network consisted of thirteen stations, when it was acquired by the newly formed Canadian Radio Broadcasting Commission (CRBC).

The competing Canadian Pacific Railway, was not to be outdone. The CPR was not looking to form its own network but did own a transmitter. It had cars specially equipped to pick up the radio stations located near the towns where they stopped before the CNR, evidenced by this photo taken from the June 19, 1922 edition of La Presse newspaper.

From 1927, the CNR linked its stations and organized them into a network. The same was true for the CPR. In July, a program was broadcast from coast to coast on the occasion of the Diamond Jubilee of Canadian Confederation.

In 1932, the Canadian government acquired the CNR network and formed the first national network under the name of Canadian Radio Broadcasting Commission. After criticism of its programming and its operations, the network became the Canadian Broadcasting Corporation in 1936.

In 1924, four Montreal stations would alternatively broadcast on the same frequency each week.

Here is a typical weekly radio program schedule that would transmit at 410 meters (730 KHz):

RCA Victor, Northern Electric, and Marconi are the most important. All three companies were located in the South-West borough of Montreal, then the industrial heart of Canada.

Established in Montreal at the beginning of the 20th century, the Marconi Wireless Telegraph Company occupied several buildings throughout its existence.

They began manufacturing radio receivers around 1921. The model C sold for as much as 195$ (approximately $3,000 today) because it included three modules: a tuner, a detector, and an audio amplifier.

Originally a manufacturer of telephones, Northern Electric diversified its production over the years and moved to several different places in Montreal:

In 1922, Northern Electric began manufacturing radios, including the Model R-1. During the 1930s, a number of deluxe models were made in Montreal.

At the beginning of the Second World War, Northern Electric began making smaller radios. They proudly displayed a "V" for Victory! And of course, military radios were also manufactured there. Consumer radio production resumed after the Second World War and the Baby Champ became one of its most popular models.

RCA Victor
Emile Berliner, the inventor of the phonograph, set up his first record pressing operation at 367-368, Aqueduct St. (now Lucien-L’Allier) in a building owned by Bell. He opened a retail store at 2315, Saint-Catherine St. Soon after, gramophones started selling in other Quebec cities as well. By 1904, a laboratory (possibly a recording studio) was set up at 138a Peel St. It was moved to 201 Fortification Lane for a short time before being incorporated into the new factory.
In 1908, the company moved into its new factory in Saint-Henri, on Lenoir St. very close to Saint-Antoine St. The construction was probably supervised by Emile’s son Herbert, a mechanical engineer who travelled frequently to Montreal during this time. This plant underwent a number of expansions over the years.

Click here to explore these and other historic locations with our Heritage Trail!

Building your own radio receiver

In the 1920s, buying an electric radio receiver represented a significant expense. Crystal radios had been around since the early 1900s and those could be had for about $20, whereas amplified devices sold for $200, the equivalent of about $3,000 today. There were numerous amateurs who wanted to build their own radios.  Businesses specializing in radio and electronics began to appear in Montreal, and plans and diagrams on radio building were published in newspapers and magazines of the time.

In 1922, the Marconi Wireless Telegraph opened a subsidiary to sell radio parts. They opened stores in Toronto and on McGill College Avenue in Montreal. Marconi’s store, The Scientific Experimenter, had a very extensive catalogue of parts.

In addition, numerous books were published explaining the operation and building of radio receivers.

Even the daily newspaper La Presse published a series of 8 articles between December 11 and 19, 1922, explaining in full detail how to build one at home for $5 (the equivalent of about $75 today).

Many stores, like the Whitman Store, shown in this ad from La Presse in December 1922, provided the necessary parts described in the paper.

Here are some videos that show how to build your own crystal radio receiver.