The final show of the Radio100 residence at CKUT focuses on the places in Montreal that witnessed the invention and development of radio technology and content in Quebec. Similar to walking on a historic trail, Alain Dufour (SQCRA president) uses geographical locations and landmarks around the city to trace the pioneers, stations and manufacturers that shaped radio as we know it today.

BEHIND THE SCENES: PRODUCING A PRE-RECORDED SHOW

Just like our previous broadcast taught us about the challenges of producing live radio, particularly the terror and awkwardness that erupts when things go wrong, our final broadcast at CKUT presented us with completely different learning outcomes.

At the end of our 3rd in-studio live broadcast we learned that the CKUT station would be closing in response to the Covid crisis. This meant that we were not going to be able to produce our last broadcast in the same way we had done the past three weeks. We were therefore presented with a choice: we could cancel our last show, postpone it to a later (unknown) date, or venture into producing a pre-recorded show.

Since the research had already been done, and the planning process was already under way, we decided to give the pre-recorded option a go. To achieve this, Alain and Anja recorded their scripted sections at their respective homes and sent the audio files to Mariana, who then recorded her own comments and edited all the pieces together to produce the final show. While listening to the broadcast, you can clearly hear the difference in sonic quality between our voices. This is due to the fact that everyone recorded their spoken sections in different spaces using different microphones.

Like in our previous shows, Alain created a detailed spreadsheet that specified the order and timing of all the talk and music sections in the show. This proved to be a very helpful tool during our live broadcasts and an invaluable resource for the editing process of this show. Considering that Anja recorded her questions in a different time and place as Alain recorded his insights, having a guide that specified how all the segments fit in the final edit made possible the successful production of this pre-recorded broadcast.

Compared to doing a show live in the studio, recording our comments gave us more control on our delivery. Any mistake could be mended by making a different recording, giving us a chance to accurately capture the scripted content. Therefore, recording the dialog segments between Anja and Alain separately resulted in a less spontaneous conversation, leaving no room for improvisation. Luckily, it all came together in Mariana’s editing station after several hours of tweaking the timing between the recorded comments and the music selections that accompanied the conversation.

In the end, we submitted our final edit of the show to the station so it could air on our originally scheduled slot, 2pm on Monday, March 23rd. It was a different kind of excitement to hear our voices on the radio after going through the recording and editing process. Having experienced the creation of live radio, we definitely had more fun being together in the CKUT studio, even with the sometimes unforeseeable hurdles that live production threw our way. Should the MOEB be involved in producing a radio show in the future, we would certainly seek the thrill and spontaneity of a live radio again.

GRATEFUL FOR THE RADIO THRILL!

It is now time to say “see you again soon!” We hope you enjoyed this exploration of radio production as much as we did. Getting to celebrate radio broadcasting heritage by shows broadcasted on the radio was an exceptionally fulfilling experience for the team involved. We hope you continue the virtual celebration of the Centennial of Broadcasting in Canada through our online content. And as soon as circumstances allow, we hope you’ll come and visit us at the museum!

P.S. We would like to send a special acknowledgement to all the great people that shape, carry and make the wonderful station that is CKUT. We thank the station for warmly welcoming us despite our close to complete lack of experience. 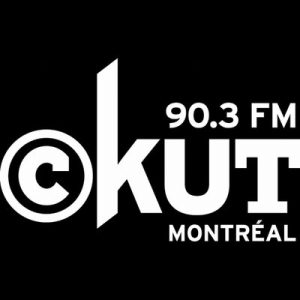